More ‘Joy’ on offer at the Art Gallery Osoyoos 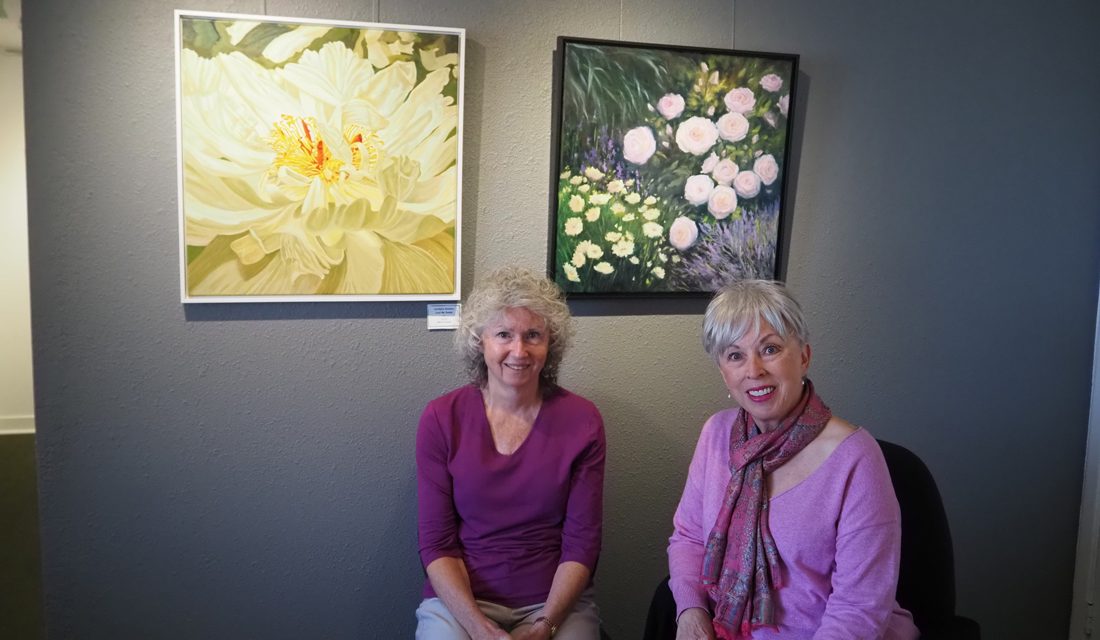 Pam Duncan (left) and Carollyne Sinclaire are featuring their paintings of landscapes, flowers and yes, donuts too! Don Urquhart photo

I suspect we all can stand a little more joy in our lives and the current art exhibition – Spark Joy – now on at the Art Gallery Osoyoos delivers exactly that.

“All of these objects sparked joy for each one of us,” says Carollyne Sinclaire, who along with Pam Duncan are exhibiting their works until Oct. 29.

“Marie Kondo says that when you’re decluttering or re-organizing your home you should show each object and it should excite every cell in your body,” Sinclaire says, explaining the impetus behind the Spark Joy theme.

“I think we felt that way about each one of the subjects enough to photograph it, to paint it and I really have a desire that anyone that comes to the show feels the same sort of happiness, the joy that we do in those subjects as they are rendered,” she adds.

For Duncan it’s natural landscapes that spark the most joy in her artistry. “I find when I go out into nature I just connect with things and I find a great joy in being in the natural environment.”

Several of her paintings on display follow from her recent art retreat in BamField on Vancouver Island’s stunning Barkley Sound. “I just felt a lot of freedom and connection because of the remoteness of the area,” she says.

Similarly there is a connection to the Okanagan because this is her home, she adds. Last year she went on a similar retreat but in the Cariboo of which she also has paintings on exhibit. “Again, it’s just being outside and connecting with nature that brings me joy.”

Sinclaire comments how much water is featured in Duncan’s paintings, whether from the coast or the Interior. “So many famous artists inspire to paint water and Pam has just done a splendid job,” she said, noting the difficulty in rendering water accurately.

Over the past 10 years Sinclaire says she’s painted a lot of different things, but she tends to paint a series, “that way I get to know the subject better and learn how to handle the paint and in this case flowers which are very intricate.”

She started painting small works featuring flowers in acrylic before the pandemic came on and then she notes something very strange happened. “For the first month of COVID I just came to a standstill, like so many people, and I didn’t paint at all.” So too for Duncan. But soon enough that invisible hurdle faded and painting returned.

Sinclaire says she became very intrigued by flowers and was invited to paint flowers from many people’s gardens. “Every flower seems to have its own personality, but I’m intrigued by the form, the diversity of hues and just the exquisite formation of a flower – the little fat pollen sacks, the little stripes that are runways for the insects, every single one of these flowers is designed for reproduction and extremely complex,” she enthuses.

Visiting the Naramata Garden Show gave her the opportunity to meet flower growers and enthusiasts, many of whom invited her back to photograph their flowers and gardens through the changing seasons to transform into paintings.

“It was very intriguing for me to learn about flowers, even an Iris, the different petals have different names and different functions, ‘these are ‘falls’, these are ‘standards’ – each one of these areas has its own name,” she explains.

Some of her flower paintings she’s named after songs, more just a coincidence than anything, a product of listening to the radio while painting, she laughs. Take for instance, “It really got me started,” “We’ve only just begun,” or “Unchained melody.”

“I would love to say that I engineered it so that the audience can have a multi-sensory approach but that actually wasn’t the truth,” she laughs.

A sinfully delicious donut beckons me from the wall as we are talking and Sinclaire laughs relating the story behind it. Some donuts, a chocolate bar and some candies in an old-fashioned dispenser are on one wall, seemingly incongruous with the floral display all around.

“This confectionery series started off because I was waiting for a couple friends in Tim Hortons and I was facing the donut display case that was lit up with lights. I found the glazing on the donuts were just as dazzling as diamonds in the window,” she says.

“They didn’t temp me to eat them but they tempted me to paint them and I couldn’t really devote myself to conversation because all I could think of was painting the donuts. So I came back the next day and bought a single donut and insisted to the staff that they put it in the box and make sure it didn’t touch the sides because I didn’t want it ruined.”

Once at home she carefully unloaded the precious cargo into her light box to photograph it in order to begin painting it. “I found it didn’t look like much until it got bitten and then you got the ooz!” she says.

Although taking photos of objects like flowers does their immense natural beauty little justice, “I know the feeling that I had, so memory is often a big part of it for me.” It’s about a “cascade of memories and emotions,” she adds. 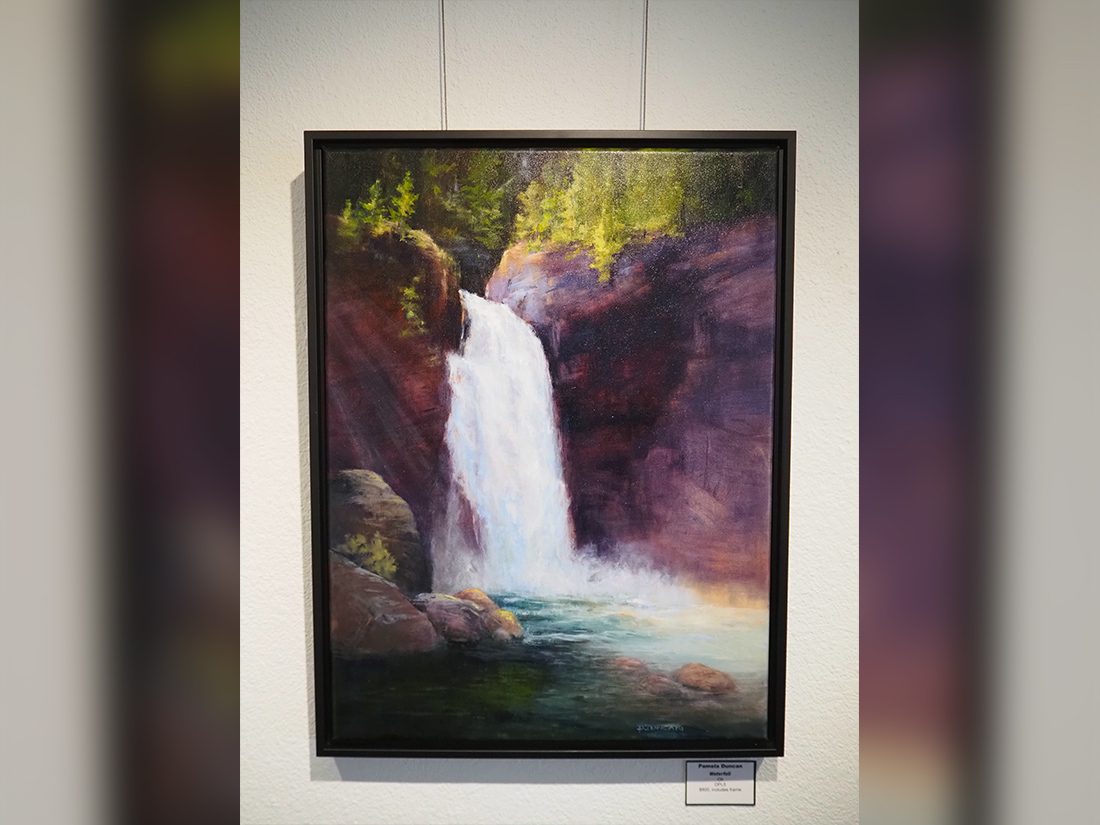 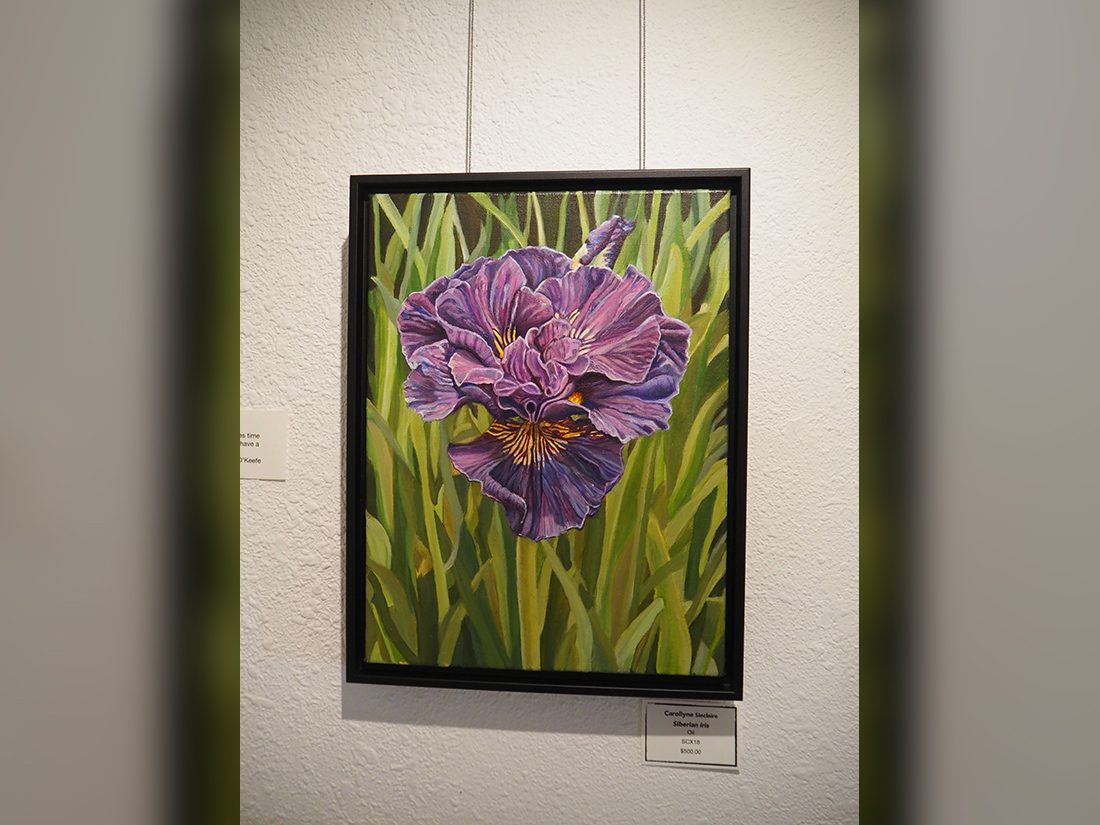 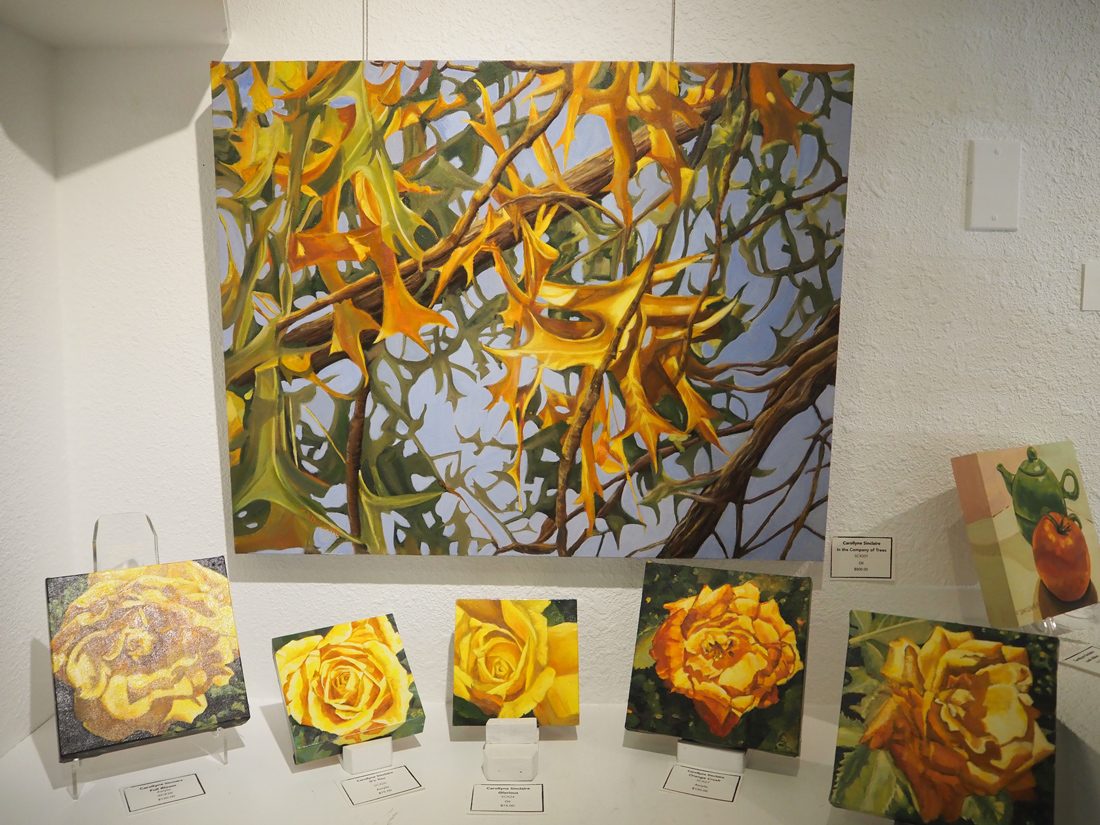 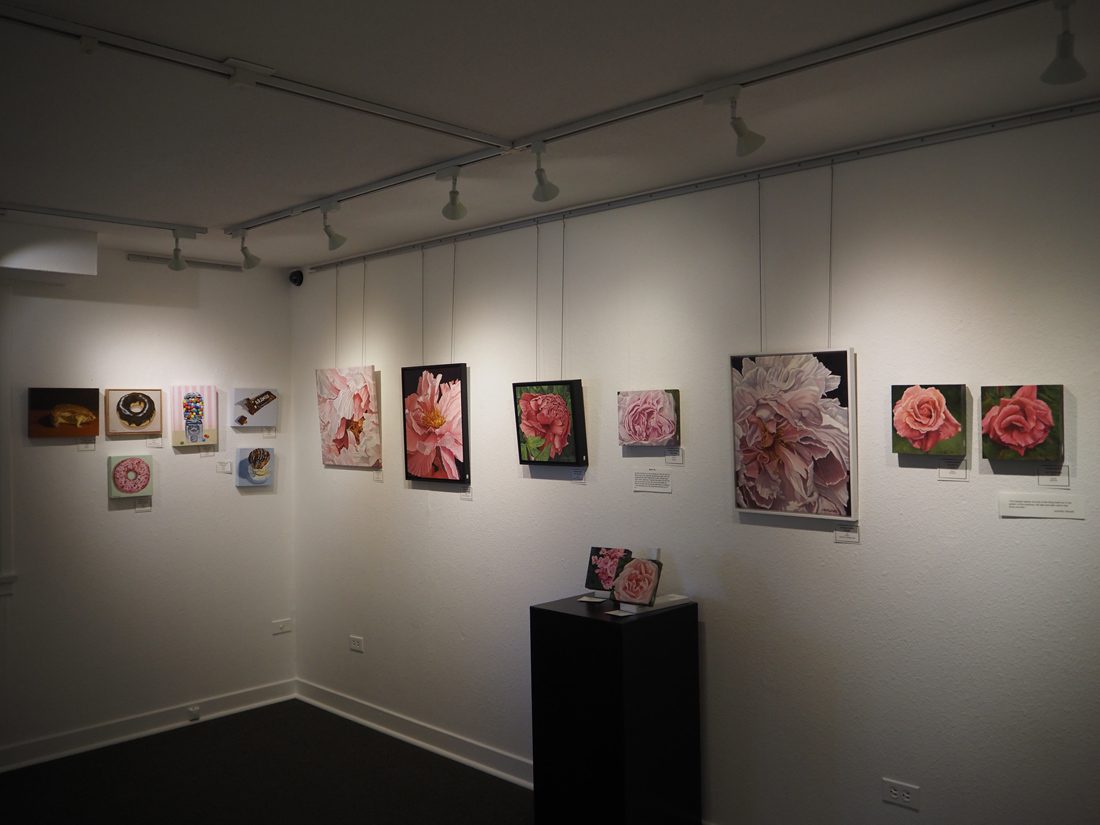 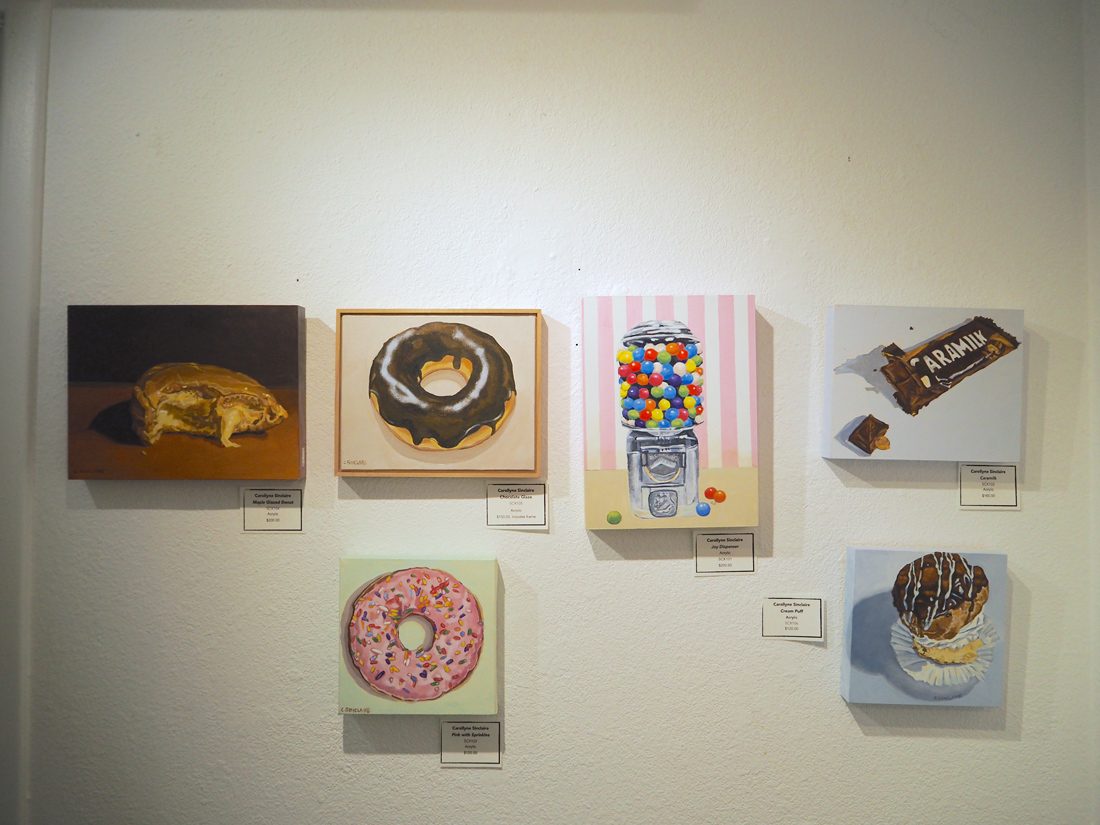 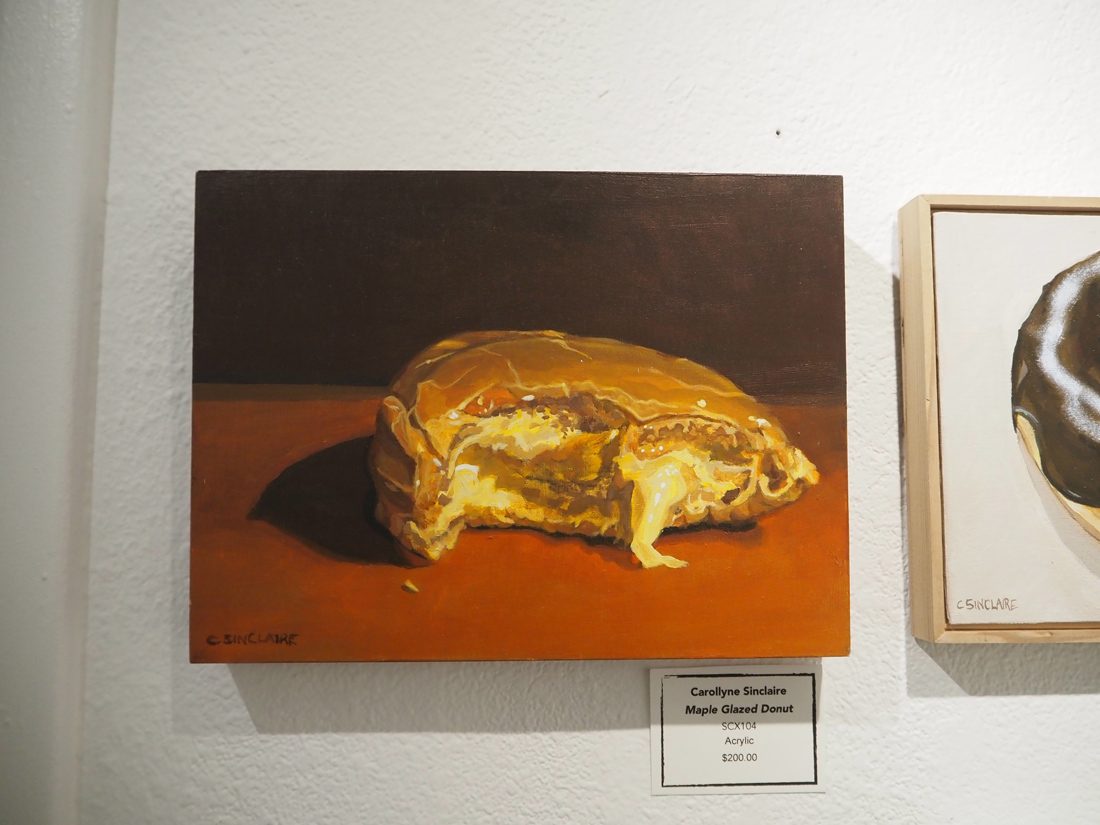 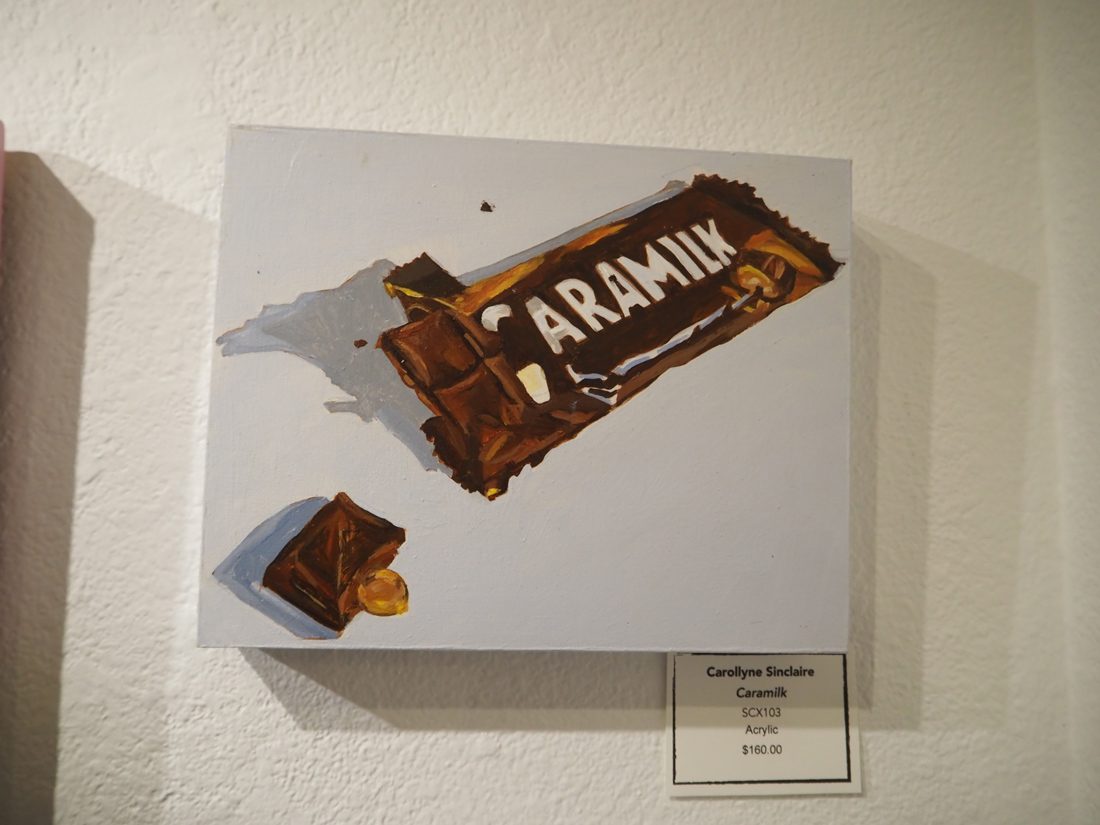 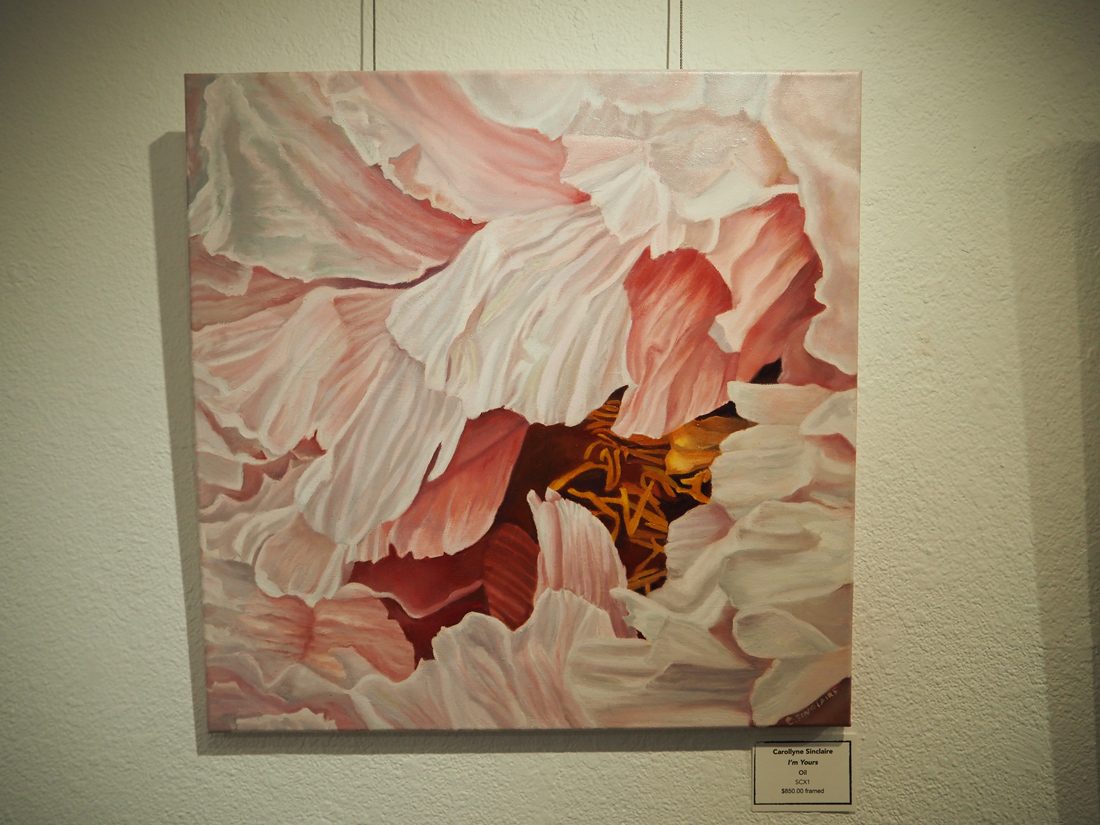 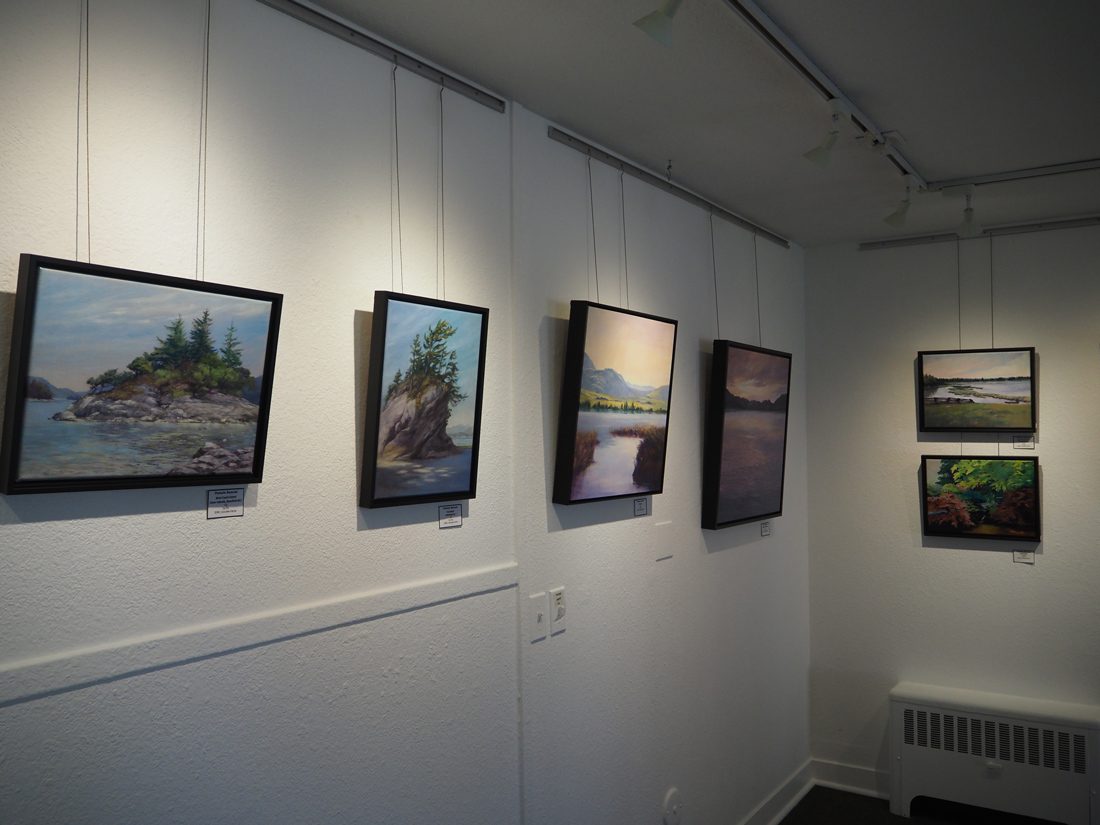 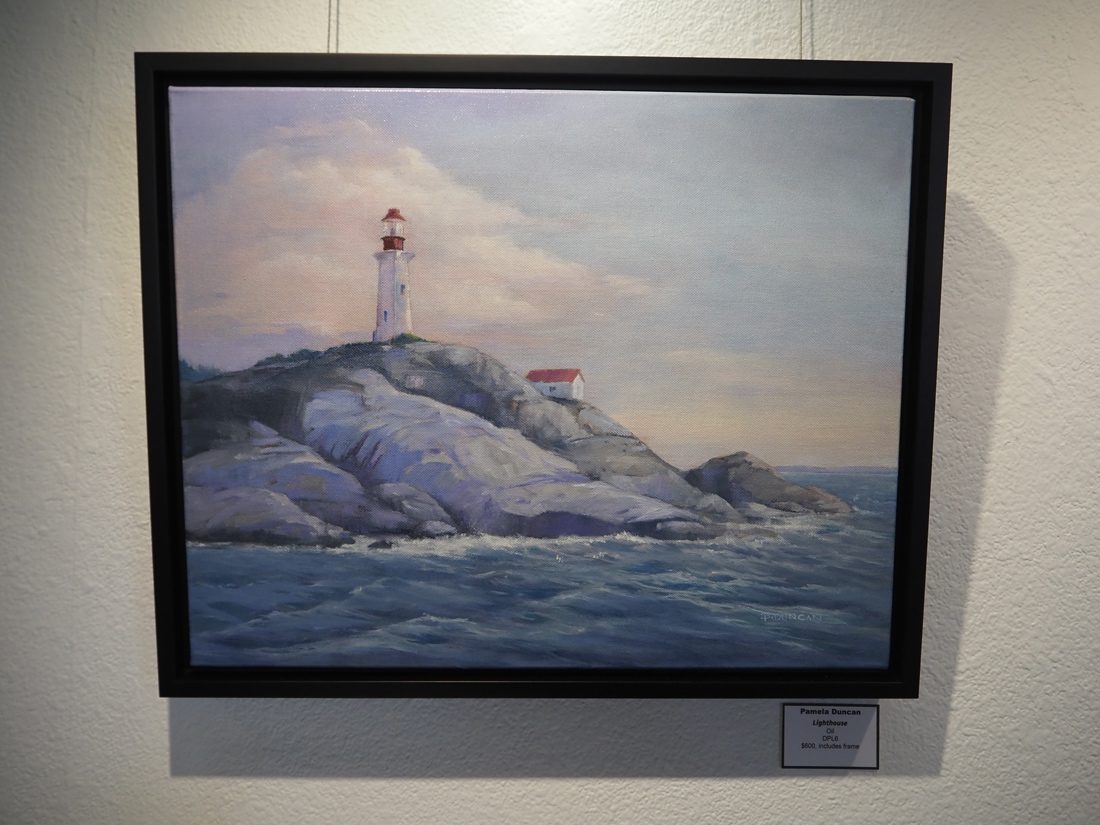 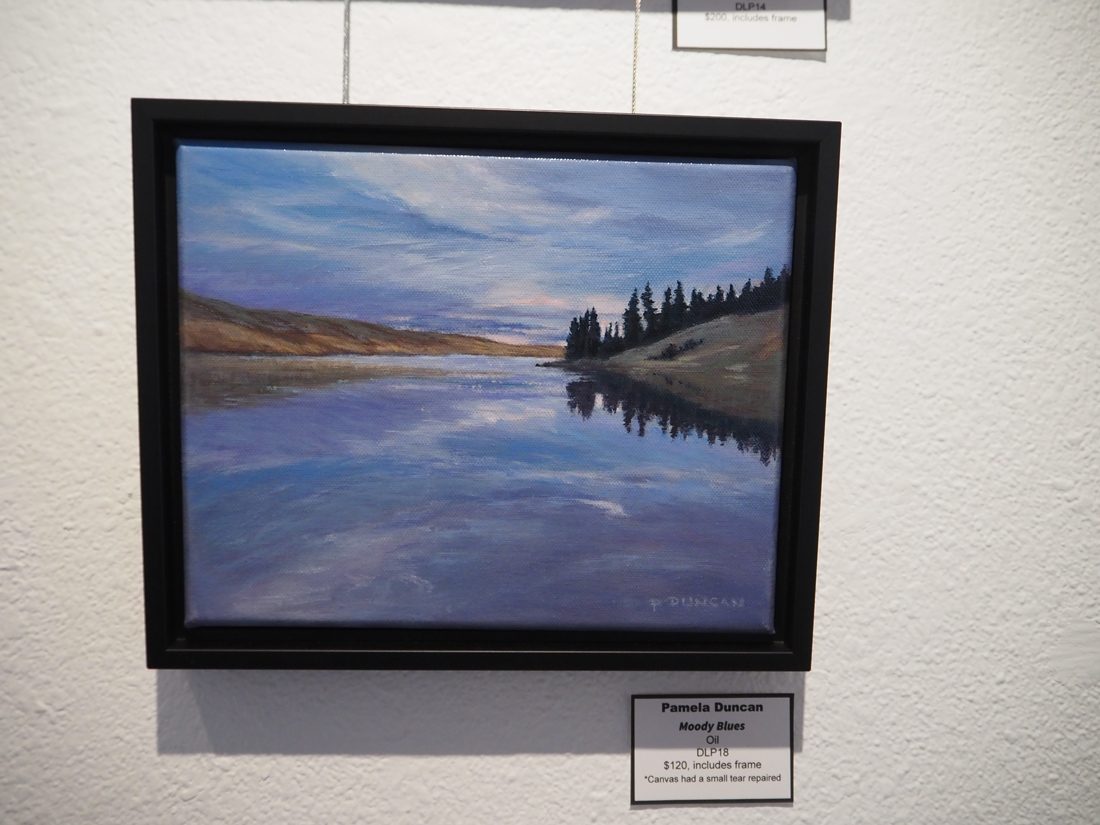